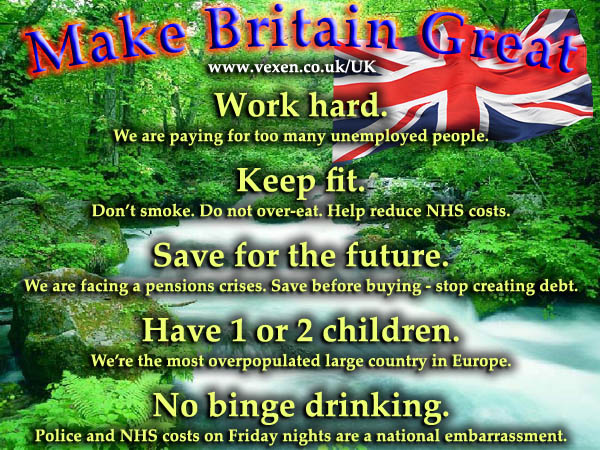 “Tower Bridge, Buckingham Palace... England does icons like no other place on earth, and travel here is a fascinating mix of famous names and hidden gems. ... In the cities, the streets buzz day and night, filled with tempting shops and restaurants, and some of the finest museums in the world. After dark, cutting-edge clubs, top-class theatre and formidable live music provide nights to remember. Next day, you´re deep in the English countryside admiring quaint villages or enjoying a classic seaside resort. There really is something for everyone, whether you´re eight or 80, going solo or travelling with your friends, your kids or your grandma. Travel here is a breeze, and although the locals may grumble (in fact, it´s a national pastime) public transport is very good, and a train ride through the English landscape can be a highlight in itself. Whichever way you get around, in this compact country you´re never far from the next town, pub, restaurant, national park or the next impressive castle on your hit list of highlights.”

“From the breathtaking geological wonders of the north coast to the gritty murals of Belfast, Northern Ireland is full of a dramatic beauty that beckons to the traveller. [...] The regional capital, Belfast, has shrugged off its bomb-scarred past and reinvented itself as one of the most exciting and dynamic cities in Britain... You can explore the tensions as they´re expressed today on a tour of the iconic neighbourhoods of West Belfast or in the province´s second city, Derry (or Londonderry), which is leading the north´s cultural revival. And it wouldn´t be Ireland if it didn´t have its fair share of stunning landscapes: from the Antrim Coast and its world-famous Giant´s Causeway to the mountains of Mourne in south County Down.”

“Like a fine single malt, Scotland is a connoisseur´s delight - a blend of stunning scenery and sophisticated cities, salt-tanged sea air and dark peaty waters, outdoor adventure and deep history. Scotland harbours some of the largest areas of wilderness left in Western Europe, a wildlife haven where you can see golden eagles soar above the lochs and mountains of the northern Highlands, spot otters tumbling in the kelp along the shores of the Outer Hebrides, and watch minke whales breach through shoals of mackerel off the coast of Mull. It´s also a land with a rich, multilayered history, a place where every corner of the landscape is steeped in the past - a deserted croft on an island shore, a moor that was once a battlefield, a beach where Vikings hauled their boats ashore, or a cave that once sheltered Bonnie Prince Charlie.”

“The phrase `good things come in small packages´ may be a cliché, but in the case of Wales it´s undeniably true. Compact but geologically diverse, Wales offers myriad opportunities for escaping into nature. It may not be wild in the classic sense - humans have been shaping this land for millennia - but there are plenty of lonely corners to explore, lurking behind mountains, within river valleys and along surf-battered cliffs. An extensive network of paths makes Wales a hiker´s paradise. Even more untamed are the islands scattered just off the coast, some of which are important wildlife sanctuaries. Castles are... absolutely everywhere. You could visit a different one every day for a year and still not see them all.”

The United Nations produces an annual Human Development Report which includes the Human Development Index. The factors taken into account include life expectancy, education and schooling and Gross National Income (GNI) amongst many others..

The Social and Moral Development Index concentrates on moral issues and human rights, violence, public health, equality, tolerance, freedom and effectiveness in climate change mitigation and environmentalism, and on some technological issues. A country scores higher for achieving well in those areas, and for sustaining that achievement in the long term. Those countries towards the top of this index can truly said to be setting good examples and leading humankind onwards into a bright, humane, and free future. See: Which are the Best Countries in the World? The Social and Moral Development Index.

The UK's population is predicted to rise to 69.31 million by 2030. This rise is despite a low fertility rate, meaning, that this country is helping to alleviate problems with growing population in neighbouring countries by accepting immigrants, very likely as a requirement of maintaining an active workforce. This country has a fertility rate of 1.87. The fertility rate is, in simple terms, the average amount of children that each woman has. The higher the figure, the quicker the population is growing, although, to calculate the rate you also need to take into account morbidity, i.e., the rate at which people die. If people live healthy and long lives and morbidity is low, then, 2.0 approximates to the replacement rate, which would keep the population stable. If all countries had such a fertility rate, population growth would end. The actual replacement rate in most developed countries is around 2.1.

When it comes to ensuring human rights and freedom, The UK leads the world, setting excellent examples. The UK does the best for commentary in Human Rights Watch reports22. It comes in the best 20 in terms of supporting personal, civil & economic freedoms23, its success in fighting anti-semitic prejudice24 (amongst the best in Europe) and in LGBT equality25. And finally, it does better than average in opposing gender inequality26, supporting press freedom27, speed of uptake of HR treaties28 and in its nominal commitment to Human Rights29 (but bad for Europe). There are "significant concerns" for the protections of Brits living abroad, and for long-term EU nationals living in the UK30, as popularist rhetoric surrounding a "no deal" Brexit would result in loss of access to pensions and elements of justice and welfare services for up to 10 million Brits throughout the EU31.

For tables, charts and commentary, see:

The UK's National Security Risk Assessment output classes the state of the UK public health as a Tier 1 national risk, the most potent of the three categories32. It's a well-known and high-profile issue; half of all science stories in the UK media are medical33 although many of the claims made are dubious33.The UK does relatively well in encouraging good health, compared to many other countries. The UK comes in the best 20 when it comes to its food aid and health contributions and WHO compliance34. It does better than average for its average life expectancy15, its suicide rate35, its adolescent birth rate26 (but bad for Europe), its fertility rate18 (but high for Europe) and in its immunizations take-up36. The UK does not succeed in everything, however. It does worse than average for its smoking rate37 (yet still amongst the best in Europe) and in its alcohol consumption rate38. The prevalence of overweight adults has increased by 14% over the last 40 years.

For tables, charts and commentary, see:

Northern Ireland is a portion of the island of Eire that has remained under British rule since, when in the 1920s, the rest of the Island was granted independence as Britain dismantled its empire. The Protestants of Northern Ireland refused to part, claiming by majority that they would remain part of the UK despite the mainland's wish to leave. The resulting conflict has had the British government pinned down, with feelings running very deep on all sides and militant actions by freedom fighters, terrorists and even government forces all stirring the "the troubles". Sometimes intense criticism of Britain comes from Irish voices who either want the UK out, sometimes it comes from those who want to stop the UK from leaving. It's a no-win situation. At its worst, it verged on civil war, and at its best, peace is obtained largely because both sides have stopped making progress, and the adherence to common EU markets meant that borders could be ignored.

“The 'troubles' began in 1968 when a civil rights movement created by the Roman Catholic minority flared into violent protest in Londonderry. [...] The IRA's campaign extended even to the mainland, where not only army establishments, but civilian targets too, were attacked with bombs.”

Religion in the United Kingdom: Diversity, Trends and Decline: Statistical and analytical review of mainstream and minority faiths in the UK

Data from the Pew Forum, a professional polling outfit, states that in 2010 the religious makeup of this country was as follows in the table below64:

By adding up the Pew Forum data for the major monotheistic religions we can see that these make up 76% of the population. Yet there are simply too many who disbelieve in God for this to be true (42%). This is due to the so-called 'Census Effect', whereby many put down a religion for cultural reasons rather than because it reflects their beliefs. In highly Christian countries, as many as half of those who say they're a Christian lack any connection to a Church, and do not hold Christian beliefs (such as believing in God!).

It appears that when asked "What religion are you" many give pollsters the 'correct' answer despite how they actually feel, and despite what they actually believe. Although 78% of the populace say they belong to a religion, only 27% say that they are religious when the question is phrased as "Is religion an important part of your daily life?".

For more on this phenomenon, see:

The Afterlife: Ipsos-NA in 2011 gathered some statistics on UK65. Despite the large numbers of Christians, not many have traditional beliefs in the afterlife - just 10%. More people don't know what to believe (32%). Some believe that upon death, you simply cease to exist (31%). Also, 3% specifically believe in heaven but not in hell (which is nice - making them possible "universalists"). 5% believe in reincarnation. 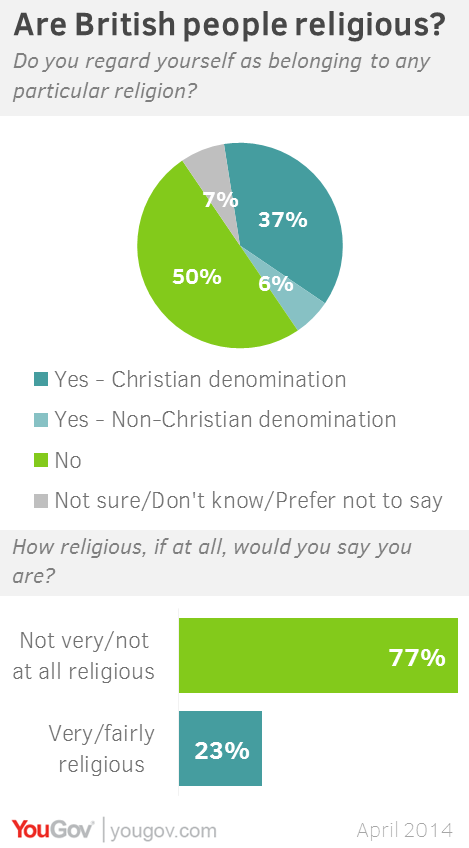 With over 170 distinct religions counted, the religious make-up of the UK is diverse, complex and multicultural. The 2011 Census shows that minority and alternative religions are steadily growing, as is Islam (at 5% of the population). Less than half of the British people believe in a god and from 2009 the annual British Social Attitudes results has revealed that over 50% aren't religious66. A 2014 YouGov poll saw 77% of the British public say they're not very, or not at all, religious67. Comprehensive professional research in 2006 by Tearfund found that 66% of the people of the UK have no connection with any religion or church68.

However, people continue to put down what they think is their "official" religion on official forms. As a result of this Census Effect in the 2011 National Census, 59.3% of us put their religion down as "Christian"69. Half of those who say they have no religion to pollsters still put one down on the 2011 Census. Even despite this, Christian numbers are substantially down from the 2001 figure of 72%. Religion in Britain has suffered an immense general decline since the 1950s. Between 1979 and 2005, half of all Christians stopped going to church on a Sunday. Four in five Britons want religion to be private, not public, and have no place in politics70. All indicators show a continued secularisation of British society in line with other European countries such as France.

Freedom of Religion and Belief:

The United Kingdom has seen many cases of paedophile priests, including many cases where Bishops and other senior Christians have protected paedophiles, moving them from post to post when accusations surface.