Wherever possible, public transport is a better optional than personal transport. It is up to governments to encourage and facilitate the widespread and consistent availability of public transport - be that trains, buses, coaches, monorails or other services. Per passenger, they are better for the environment in producing fewer fumes, more economical for national fuel use, they reduce road congestion and are better for personal safety. They reduce national insurance costs (which are higher for personal vehicles) and improve national transport resilience and help prevent panic-buying when issues effect fuel supplies. Personal transport should be used as a last resort only when public transport is impossible. 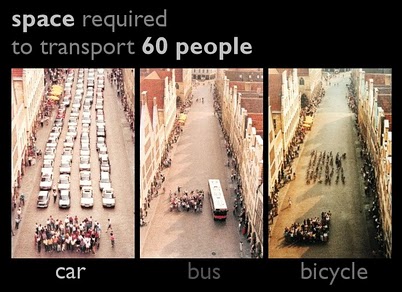 Some people hold that public transport acts to "provide a social service for the poor [but rail] passengers are in fact overwhelmingly middle-class"5. This is probably due to the massive benefits of making daily commutes in pooled transport, therefore meaning many businessmen and workers use it.

“Britain's railways have prospered over the past 10 years. Passenger numbers have risen by 40%, and trains now carry more people than they have in 50 years.”

Passenger travel aside, there are also benefits for increasing the rail network in general. Traintracks use up less space than roads, are more easily concealable so cause less visual disruption, and with increased rail coverage comes increased freight. "Carrying freight by rail results in an 80% cut in CO2 emissions per Kilogram carried compared to road haulage" and can replace 50 lorry movements1. This is a massive environmental and commercial saving.

The cost to the environment is something that affects everyone. Economic concerns dictate that for future prosperity we must invest now, in a greener future. An initial cost will prevent massive costs later. Combining that with the freight savings of rail, it makes sense for governments and citizens to support the rail system.

There are additional advantages to saving on fuel usage, aside from the benefits to the environment. Politics and oil supplies are often uneasy bedfellows: by reducing fuel usage, we are making our country more independent of the major oil-supplying countries who sometimes disrupt our lives by restricting oil. If oil consumption dropped, then it will be less effective to use oil supply as a political weapon.

3. British Buses: The Loss of an National Asset

In England and Wales, buses were privatised and deregulated in the 1980s7.Since then, the UK government - largely the Conservative Party - have systematically defunded services under the policy of commercialisation, having the effect of continually reducing the number of routes and the frequency of buses8 except in cities9. Remaining council-supported routes have been steadily defunded9; between 2010 and 2018 alone they lost 50% of their funding8,7. Bus Fares have risen and priced out commuters and individual travellors9. The result, according to the Campaign for Better Transport, is that "we are... seeing the emergence of `transport deserts´, with limited or no transport apart from individual cars"3 and unable to be a part of ordinary life planning. But the benefits of buses are clear10.