An Unidentified Flying Object (UFO) describes any object in the sky until it can be given a different name1. The most exciting result possible is that some are intelligent aliens visiting us from another planet. But a great number of rational investigations have been conducted by dedicated and well-funded space programmes across the world, by military researchers, government bodies, hundreds of university departments, and many well-funded independent space-related organisations as well as a horde of scientifically-minded independent analysts. Where conclusions can be made, UFO always turn out to be ordinary phenomenon and hoaxes2.

Common causes of UFOs are the planet Venus, blurred insects and birds close to a camera, Chinese lanterns, sweeping lighthouse beams, balloons and launched scientific instruments3, planes, objects such as plastic bags whipped up by the wind and presumed to be further away than they really are, and a variety of unusual but perfectly terrestrial weather phenomenon.

Conspiracy-minded people think that the many people involved in detecting space and near-orbit events are altogether involved in a mass lifelong pact, for rather unclear reasons, to hide the evidence. They must be constantly coercing tens of thousands of scientists, operators, data analysts, institution staff, government workers and the entire IT security departments at all those places, silently making them all comply, without nosy national governments ever noticing and with no defectors. Needless to say, skeptics routinely bang their heads in confusion as to what kinds of psychology is in operation when people think that they've personally discovered the truth, when flocks of dedicated professionals cannot.

All Unidentified Flying Objects (UFOs) investigations that have concluded after a period of sensible research have found UFOs to be terrestrial and mundane in nature2. Investigations are carried out by military institutions across the world, by many governments, and by civilians at universities and many independent space-related organisations. In total, there are thousands of funded research groups, not including scientifically-minded independent analysts, and they are not producing any evidence - or even hints - that any UFO activity has been alien in origin2.

Where there is no evidence, though, many people cling, out of hope or fear, to the idea that UFOs are aliens. Many believers in alien-based UFOs simply haven't devoted time to analysing the likelihood of their beliefs, and certainly aren't aware of the scope of scientific research being conducted.

Responsible scientists such as those at SETI complain that their science-based approaches are sometimes confused with UFO-ology. Its director Dr Seth Shostak said it makes him "squirm" and emplores that next time someone is abducted by aliens, won't they please bring back at least a piece of physical evidence?4.

Conspiracy-minded people think any genuine discovery of alien activity is being covered-up by the government, however, this is unfeasible. Space and atmospheric research groups include tens of thousands of people per year. There are no institutions that can consistently and comprehensively "silence" so many people during investigations, and then during their entire lifetimes afterwards. Not a single whistleblower, ex-secret-organisation or government employee has emerged from the dark to provide physical proof or consistent argumentation that they were previously being cloaked by a conspiracy. To maintain such a cloak would require the co-operation of a great number of enemies and competitors across the globe: China, the USA, Iran, Israel, multiple EU space programmes and every other country's scientific and governmental research bodies on space and near-orbit phenomenon would all need to be in on it, as well as a well-funded, advanced management-tier of information-hiding professionals who can deal with the vastly different cultures, educations and ethics of disparate and conflicting countries across the world. In order to suppress evidence, control all these people and organisations, and actually do something with the evidence and alien technology, the total number of people involved would have to be multiple hundreds of thousands across the world.

The same conspiracy theorists then think that this ultra-effective secret worldwide organisation is unable to take down some YouTube videos and blurry social media posts, from which they learned the "real truth". There's no doubt why skeptics are despondent about the Human ability to cling to stubbornly cling to beliefs despite all rationality.

“[UFOs] tell us absolutely nothing about intelligence elsewhere in the universe, but they do prove how rare it is on Earth.”

2. The UFO Craze Was Created by Sensationalist Media and Hoaxes

It is considered a matter of common sense to admit that the popular press play up and exaggerate stories, including (and especially in previous decades) when it comes to UFOs. The press behaved in the same way as it did with other 'moral panics' - with much sensationalism and disregard for evidence. It started in 1947, when Kenneth Arnold saw 9 small weather balloons that were strung together, 'flying' in formation in the sky1. The papers came up with the idea of 'flying saucers' on their own, and henceforth, enthusiastically published hyped-up articles attributing all unidentified flying objects to mysterious advanced technology and aliens1. It was a science-fiction decade, with a popular press to match.

Aside from the press, hoaxes added to the numbers of reports. Three military men lost their lives investigating UFOs such as those seen near Maury Island. Gardner reports that "the entire Maury Island episode later proved to be a hoax elaborately planned by two Tacoma men who hoped to sell the phony yarn to an adventure magazine. Both men eventually made a full confession"3. 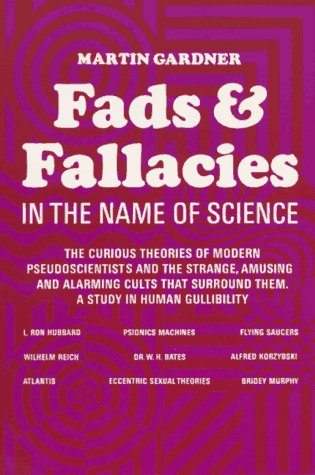 “At first the military forces brushed aside the flying-saucer mania as mass delusion, but after the reports grew to vast proportions, the Air Force set up a "Project Saucer" to make a careful investigation. After fifteen months they reported they had found no evidence which could not be explained as hoaxes, illusions, or misinterpretations or balloons and other familiar sky objects. [...]

A book could be written about flying saucer hoaxes perpetrated in the past few years by pranksters, publicity seekers, and psychotics. Unfortunately, exposure of the hoax seldom catches up with the original story.

Even more difficult to expose are the semi-lies - accounts which have a basis in fact, but may be grossly exaggerated. For example, an observer sees a balloon but is convinced it is a saucer. Others are skeptical and this irritates him. So to convince them, he adds details, or exaggerates what he has seen. He may do this without being aware of it, and later recall the episode not as he saw it, but as he has added to it in his desire to convince himself and others. This is a well-known human failing and there is no reason to suppose it could be involved in hundreds of so-called saucer sightings.”

3. What We Learn From Skyhook Balloons

“We all suffer from systematic cognitive dysfunctions; they infuse the very way we notice and analyse data, and distort our forming of conclusions. Even our very perceptions are effected by pre-conscious cognitive factors [...]. Our brains were never meant to be the cool, rational, mathematical-logical computers that we like to sometimes pretend them to be.”

Investigation of UFOs has always found, where evidence is available, that the source of the sighting is an optical illusion, a result of human error or misunderstanding, or normal skybound objects that the observer has mistaken for something spooky. The example of Skyhook balloons teaches us much about the human predisposition to prefer exciting and stimulating theories to normal and mundane ones. First, the basics:

“[In 1951 Feb] the Office of Naval Research distributed a ten-page report on the Navy's huge skyhook balloons, used for cosmic-ray research. The report pointed out in detail the ease with which these giant plastic bags - a hundred feet in diameter - could be mistaken for flying disks. The balloons reach a height of 100,000 feet, and are often borne by jetstream winds at speeds of more than 200 miles per hour. If the observer guesses the balloon to be farther away than it is, then, of course, estimates of speed can be incredibly high.

At a distance, a balloon loses entirely its three-dimensional spherical aspect. It takes on the appearance of a disk [and] a globular object viewed through a telescope looks remarkably like a plate. [...] The plastic composition of a skyhook balloon offers a surface that seems highly metallic in reflected sunlight. Most of the saucer reports describe the disks as silvery in color. At sunset the balloons may shine in the sky for thirty minutes after the earth has become dark [due to their height]. "If your imagination soars," the Navy release said, "[...] The wisp of the balloon's instrument-filled tail may impress you as the exhaust. The sun's rays may suffuse the plastic bag to a fiery glow" [...].

One of the few points on which all observers of flying saucers agree is that there is no noise. This excludes, of course, any known type of propulsion, but is precisely the way a balloon behaves. Observers have sometimes insisted that what they saw could not be a balloon because it was moving against the wind. They forget that wind directions in the stratosphere may be quite different from wind directions on the ground. [...]

The first skyhooks went up in 1947, the year flying saucers were first reported. [...]

At the time of the Navy's report, 270 skyhooks had been released from various spots in the United States, often remaining in the sky more than thirty hours. Frequently, lost balloons were actually traced by following press reports of flying saucer sightings!”

We are inclined towards seeing things in a more dramatic and exciting light. We learn that before concluding extraordinary things, we should first check our basic perceptions and thinking processes because our perceptions and ideas can cause us to fool ourselves.