Our memories change over time and frequently they are simply wrong1,2. But most of us tend to think of memories as accurate accounts2. Extensive studies have shown that our memories of events are active interpretations of the past rather than picture-perfect records of it3,4. The best way to avoid errors is to write things down as early as possible2. Our recall of the past is affected by our present expectations and by our current knowledge and state of mind5. We tend to suppress and alter memories that damage our self-esteem2,6. Psychologists such as Elizabeth Loftus have shown through repeated experiments that simply by asking people questions about what they think they saw or heard previously, you make their subconscious whir into a creative drive in order to answer the question, even if it means making up details, and allowing assumptions and feelings to silently trick our minds into inventing elements of memories. Memories that are full of details give us a great sense of confidence, but, such memories are just as likely to contain accidental fabrications, many errors, and a great number of "filled-in" details which we simply subconsciously invented.

1. Our False Confidence in our Own Memories

Scientific studies since the 1930s have consistently affirmed that "what we think we've seen frequently replaces what we've actually seen"3. Elizabeth Loftus showed in experiments that when they were asked what colour a barn was in a photo, many witnesses will report that it was red, even when there was no barn in the photo at all. This strangeness occurs because our brain effortlessly makes up evidence to fill gaps in knowledge. Witnesses of violent crime, which you might assume would have such a visual impact as to be unforgettable, manage to completely make up on average of 1.25 'facts' per crime, all of a kind more serious than simply getting some descriptive elements wrong such as physique or clothing of a gunman.

Studies by Elizabeth Loftus on leading questions has shown that our recollection of even quite recent events is skewed by the way we think about them or are asked about them; such studies have become prodigal for police interview methods and in particular for cases of child abuse where forceful questions can 'lead' a child into 'recalling' events in the way that the adult is implying they occurred. We have all experienced the guilty feeling that, after arguing with a friend, we have perhaps reconstructed past events into how we wanted them to have occurred, rather than how our friend saw them.

There is one particular problem with the precarious nature of memory: they nearly always feel very accurate, and we rarely doubt the details that we are sure we witnessed.

“Most of us are deceived into thinking that the more vivid and detailed our memories are, the more accurate they are. The scientific evidence does not support our intuition here. [...] This illusion of confidence not only leads us to put more faith in our own memories than we should, it also leads us to put more faith in the testimony of others when they express certainty and appear self-assured.”

Carroll, like Loftus, highlights the particular problems that this causes for police who are pursuing eyewitness testimonies8.

“There have been many studies by social scientists that have found that eyewitness testimony is highly inaccurate but is considered highly trustworthy. Most people are not very good at identifying a stranger whom they saw briefly on a single occasion under stressful conditions, especially if the stranger is of a different race than the witness. As with memory studies, eyewitness studies have not found that the confidence of eyewitnesses is any indication of the accuracy of their testimony.”

Extensive studies have shown that our memories of events are active interpretations of the past rather than picture-perfect records of it3,4. Our recall of the past is affected by our present expectations and by our current knowledge and state of mind5.

“Most of us are also affected by hindsight bias: we construct our memories to fit with what we believe or know in the present. Many studies have shown that how people had judged something in the past changes in light of new information or later experience and they deceive themselves into thinking that their original judgment was in tune with the new information even though it wasn't. Memory might well be described as the incessant construction of the past and be seen as just one aspect of our tendency to confabulate.”

“Bartlett concluded that interpretation plays a large and largely unrecognized role in the remembering of stories and past events. [...] Rather than human memory being computer-like, with the output matching the input, Bartlett and Hunter believe that we process information in an active attempt to understand it. Memory is an 'imaginative reconstruction' of experience (Bartlett, 1932)."”

Guy Harrison, writing on the trustworthiness of eyewitnesses of miracles, tells the same story:

“Witnesses are notoriously unreliable in courtrooms. Memory is now understood to be more like a mental retelling of an event, rather than an accurate snapshot. Everyone is vulnerable to misinterpreting sensory input and even to experiencing hallucinations.”

Some special techniques for helping people to retrieve memories, such as hypnosis, have proven to be just as prone to mistake, error and subconscious invention. The problem with hypnosis is that many people consider to be a surefire way of retrieving memories so that they trust such memories with far too much confidence. 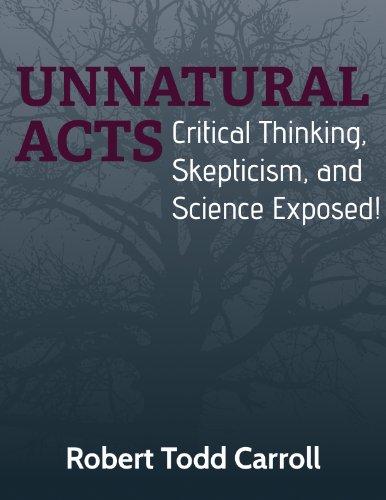 “Interrogators have been tempted to use hypnosis to help people remember, but the evidence is overwhelming that hypnosis leads people to remember things that never happened. People are often very confident in their erroneous hypnotic memories, probably because they are so vivid and easy to come by under hypnosis. The evidence, however, does not support the notion that the more confident one is in the accuracy of one's memory the more accurate the memory is likely to be. People are as confident of their false and inaccurate memories as they are of their accurate ones.”

For more on the general topic of thinking errors, see my full page on the topic:

“We all suffer from systematic thinking errors13,14 which fall into three main types: (1) internal cognitive errors; (2) errors of emotion15, perception and memory; and (3) social errors that result from the way we communicate ideas and the effects of traditions and dogmas. Some of the most common errors are the misperception of random events as evidence that backs up our beliefs, the habitual overlooking of contradictory data, our expectations and current beliefs actively changing our memories and our perceptions and using assumptions to fill-in unknown information. These occur naturally and subconsciously even when we are trying to be truthful and honest. Many of these errors arise because our brains are highly efficient (rather than accurate) and we are applying evolutionarily developed cognitive rules of thumb to the complexities of life16,17. We will fly into defensive and heated arguments at the mere suggestion that our memory is faulty, and yet memory is infamously unreliable and prone to subconscious inventions. They say "few things are more dangerous to critical thinking than to take perception and memory at face value"18.

We were never meant to be the cool, rational and logical computers that we pretend to be. Unfortunately, and we find it hard to admit this to ourselves, many of our beliefs are held because they're comforting or simple19. In an overwhelming world, simplicity lets us get a grip. Human thinking errors can lead individuals, or whole communities, to come to explain types of events and experiences in fantastical ways. Before we can guard comprehensively against such cumulative errors, we need to learn the ways in which our brains can misguide us - lack of knowledge of these sources of confusion lead many astray20.

Learning to think skeptically and carefully and to recognize that our very experiences and perceptions can be coloured by societal and subconscious factors should help us to maintain impartiality. Beliefs should not be taken lightly, and evidence should be cross-checked. This especially applies to "common-sense" facts that we learn from others by word of mouth and to traditional knowledge. Above all, however, our most important tool is knowing what types of cognitive errors we, as a species, are prone to making.”

The problems with our memories feeds into the overall problem of subjectivism:

“Subjectivism is a problem of epistemology (theory of knowledge). The word describes the fact that we can only understand the world through our own senses and our own rational deliberations, in conjunction with our own limited experience in life. Our brains are imperfect organic machines, not a mystical repository of truth. Our senses are imperfect, our point of view limited, and the reality we experience is never the total picture. Our divergent contexts result in each of us interpreting, understanding and perceiving the world differently to one another even when looking at the same stimulus. Human thought is infused with systematic thinking errors. Our knowledge of absolute reality is hampered by our limited insights and imperfect brains, and we can never truly escape from the shackles of our own minds. Our total take on reality is a mix of guesses and patchwork. These problems have been debated by the most ancient philosophers, thousands of years ago, and no practical answers have yet been forthcoming.21.”