Emergent properties are those that appear beyond a certain scale of organisation even though they are not present in the underlying structure1,2. If you microscopically examine a painted picture of a flower, you can catalogue the physical properties of the molecules of paint without ever finding a trace of the outline of a flower: only through their pattern as a whole does form, shape and beauty emerge. In biology and physics there are many complicated features that emerge from simple rules, simple interactions, merely repeated on a large scale3. Our consciousness arises from complex neuronal activity in our brain4,5,6. Some imagine that on larger scales, entire planets might be conscious (the Gaia hypothesis), or even the entire Universe (scientific pantheism).

The late physicist Victor Stenger wrote at length on the many ways in which simple rules can result in complexification, normally simply as a result of basic interactions being repeated on large scales7. But the concept itself has been around much longer; the term being first used by philosopher G.H. Lewes in 1875 based on earlier work in philosophy and fledgling natural sciences. The fundamental principal is one in which simple rules, when played out, have results that require new statistical laws and rules to describe the effects. I.e., new properties emerge that cannot be modelled on the basic interactions of the constituent parts.

No matter how long you study deoxyribonucleic acid (DNA) you will never realize just how amazing it performs when placed in a cell nucleus wherein it can generate proteins and create living cells. You need to step back and observe the results of the entire system, and analyze it at a step backwards, before you can understand the importance of the smaller units.

“... [reductionists argue that] nature is organized by simple universal laws of physics to which all other laws and principles can eventually be reduced. [... but at the least] it is surely an oversimplification. At each level of organization, especially at the living cell and above, phenomena exist that require new laws and principles, which still cannot be predicted from those at more general levels. [...] Perhaps prediction of the most complex systems from more general levels is impossible.”

“Consider a newspaper picture of a face composed from myriads of tiny dots. No amount of scrutiny of the individual dots will reveal a face. Only by standing back and viewing the collection of dots as a whole, on a coarser scale, does the image emerge. The face is not a property of the dots themselves, but of the collection together - it is to be found in the pattern, not in the constituents. Likewise, the secret of life will not be found among the atoms themselves, but in the pattern of their association. [...] Atoms do not need to be 'animated' to yield life, they simply have to be arranged in the appropriate complex way. [...]

An appreciation of the holistic nature of life enables the old idea of a life-force to be comfortably abandoned, for that too is based on level-confusion. The idea that some magical quality must be bestowed upon inanimate matter to 'bring it alive' is as misguided as to suppose that electrical switches must be given 'computing power' or ants endowed with a 'colonial spirit', before these systems can function collectively.”

2. The Evolution of Consciousness

“Human thoughts and emotions emerge from exceedingly complex interconnections of physical entities within the brain.” 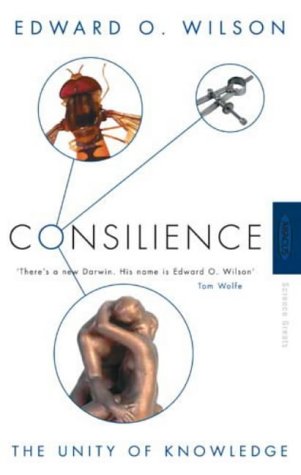 “Consciousness consists of the parallel processing of vast numbers of such coding networks. Many are linked by the synchronized firing of the nerve cells at forty cycles per second, allowing the simultaneous internal mapping of multiple sensory impressions. [...] Who or what within the brain monitors all this activity? No one. [...] There is not even a Cartesian theater, to use Daniel Dennett's dismissive phrase, no single locus of the brain where the scenarios are played out in coherent form. Instead, there are interlacing patterns of neural activity within and among particular sites throughout the forebrain, from cerebral cortex to other specialized centers of cognition such as the thalamus, amygdala, and hippocampus. There is no single stream of consciousness in which all information is brought together by an executive ego. There are instead multiple streams of activity, some of which contribute momentarily to conscious thought and then phase out. Consciousness is the massive coupled aggregates of such participating circuits.”

E. O. Wilson also repeats the little expression of the biologist S. J. Singer to sum it all up8:

I link, therefore I am.

Our biological and neurological understanding of the brain is much more advanced than when E.O. Wilson wrote his summary above, although there are many problems still to solve. Some of these are current, but some involve historical evolution. There are two main types of theory that attempt to explain why consciousness emerges: (1) Adaptive or (2) Coincidental.

"Psychology: The Science of Mind and Behaviour" by Richard Gross (1996)5

In "Kinds of Minds" by Daniel C. Dennett (1996)9 the author airs a respectable theory of the first kind: That consciousness arose as a method for trying to manipulate other individuals' reactions to our actions. In 'mapping' their consciousness we discovered a space to analyse our own emotions too. Combine with words and language and we have a modern conscious lifeform where consciousness awareness is selected for on the basis of the benefits of increased social skills.

Despite the facts, some have argued point-blank that consciousness didn't evolve: it is an "all or nothing affair" that must be divine in origin. Such arguments go back to the first centuries of mankind, and a standard response is to point out the contiguous nature of forms of consciousness:

“[Gilbert] Chesterton's thesis, of course, is that there is a such a huge difference between men and animals - men speak, create works of art, laugh, wear clothes, feel guilt, form governments, worship God, and so on - that one cannot conceive of a transitional stage. The simple answer is that the same vast difference exists between a man and a newborn baby. The reply that a baby grows into a man is irrelevant. The point is that if a baby and man can be the end points of a continuum, with no sharp line which the infant hurdles to acquire 'human' traits, then there is at least no theoretical reason why man and an animal ancestor (much more 'human' than a newborn baby) might not lie on a similar continuum.”

Animal consciousness has evolved through a long process of gradual complexification. At no particular point in the history of the gradual evolution of the nervous system has a soul become necessary. We do not find that at a certain level of development animal brains stop working unless a mystical injection of a soul occurs. Complexity and consciousness exist on a long scale, with no particular starting point. Our 'soul' is our brain, and nothing more. We have merely mistaken some of the emergent properties of consciousness to be a soul, somehow different from the brain itself. Now we know enough neurology to say for sure that this isn't true. In short there is only one sensible conclusion: Souls do not exist. This lesson from natural biology came too late for some, and the belief in special souls just for Human Beings has pervaded Human religions up to the present day.

“Pantheism is a form of theism (god-belief) which equates the universe itself as god: be this in either a conscious or automatic sense. The whole system of physical laws, cause and effect, and time itself, are the internal workings of a perfect divine being. God isn't an external being to the Universe but is rather a non-personal, non-anthropomorphic and non-personified omnipresent being. Strato of the 4th century BCE may have been a pantheist12, Giordano Bruno is said to have professed pantheism and was burned at the stake by the Roman Catholic Church for it, in 1600. Despite that earlier event, pantheism is associated more strongly with Baruch Spinoza of later on in the 17th century. The World Pantheist Movement (WPM) is the principal organized form of this belief today13. Pantheism is similar to deism, especially in a practical sense, so much so that many call the WPM a philosophical society rather than a religious group. Pantheism has a very good and clean image, is accepting of science and human understanding because all such insights are pathways to the divine.”

There are a few different strains of pantheism, but a dominant form is the one that sees god itself, omniscient and omnipresent, as an emergent property of the universe itself.