We all know that emotions can get in the way of sensible thinking: our decisions and beliefs are influenced unduly by emotional reactions that often make little sense1. We jump to instinctive conclusions that are not warranted to a rational appraisal of the evidence, and we only seek disconfirming evidence for opinions that we don't like. We are compelled to dismiss doubts and dismiss evidence that goes against our train of thought if our emotional intuitions continue to drive us2. With academic understatement, one psychologist states "we are not cool computing machines, we are emotional creatures [and] our moods infuse our judgments"3 and another states "some beliefs are formed based primarily upon an emotional evaluation"4. In public we heartily deny that our emotions influence our formal decisions, especially in non-trivial or non-social matters. We do the same with our private thoughts; when debating with ourselves we often falsely "construe our feelings intellectually"5. There's got to be a better way! Many argue that logical thinking requires the suppression of emotion6. Should we strive to be like the Vulcans from Star Trek? Psychologists are saying that this isn't for the best. Our emotions are experts at interpreting social situations and predicting other people. Behind the scenes, our brains take many things into account that we don't consciously notice. So in many situations (especially those involving living beings) our emotional reactions are more well thought-out than intellectual alternatives7. We have to learn to be wise and to learn when our feelings are working to our advantage, and when they are merely getting in the way.8,9 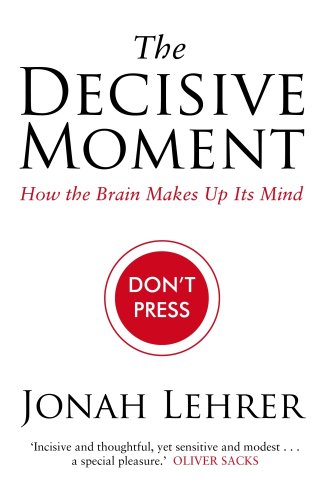 It is not the case that emotions are on the whole counter-productive when it comes to the search for truth. The theme of the book "The Decisive Moment: How the Brain Makes Up Its Mind" by Jonah Lehrer (2009)9 is that our emotions have evolved in order to aid rapid decision-making, taking account of all kinds of subtle stimulus and as a result, when it comes to making quick decisions, it is sometimes important to trust our emotions first. Especially when gauging other people, their behaviour, and their motives.

“Research psychologists have for a long time explored the mind's impressive capacity for processing information. We have an enormous capacity for automatic, efficient, intuitive thinking.”

“At least since Plato (375 BC), many Western thinkers have viewed emotions as impediments to rational thought or, at best, harmless asides. [...] Charles Darwin wrote perhaps the first book on the biological psychology of emotions, The Expression of the Emotions in Man and Animals (Darwin, 1872). He proposed that emotions and emotional expressions had become refined through natural selection and were therefore an advantage for our ancestors, but he assumed their usefulness was outlived in humans. [...] For Darwin, emotions were a bit like vestigial parts of the body, such as the appendix in the digestive system that is an evolutionary hangover from times when it did have a useful function.”

In one hand, we all acknowledge the role of emotions underlying our choices, beliefs and behaviours. We allow whole certain areas of our lives to be governed by emotions. But in the other hand is everyone's hidden secret: emotions also underlie many of the opinions that we pretend to hold for rational and intellectual reasons. That's right - the psychologists are on to everyone. Human beings are just not cut out for careful rational thought8. It takes dedication, (self-)training and pigheadedness to approach things purely rationally. Every when we think we have our emotions under lock and key, or we think we are in an area of thought that is emotionless, there is often a worrying doubt: Am I deluding myself for some subconscious emotional reason? We will never be like Data, the android from Star Trek, who struggles unsuccessfully to allow emotion to inform his decisions. We will always struggle against emotion, hiding it, denying publically that emotion influences our decisions even while we suspect its unduly powerful influence in all our decisions.

You should not trust your emotions or instincts when it comes to statistics, trends, raw data, and analysis of anything which does not form part of our daily lives, because our emotions evolved for social interpretation and rapid decision-making, therefore, that is where they work best. Science, philosophy and rationalism ought to be done instead in a cool, methodical and systematic manner.